WEEK 3: CANE OF THE WEEK

Seth helped lead the Hurricanes to its first win of the year.  He was involved in 5 of the 7 TD’s scored.  He rushed the ball 10 times for 97 yards and scored two TD’s.   He was 7 of 12 passing for 145 yards and 3 TD’s including a 50-yard pitch-and-catch with fellow senior Jordan Eberhardt.   The duo found each other again in the second quarter on a 2-yard touchdown pass and catch to give the Hurricanes a 21-0 lead on their way to a 46-14 victory against Lincoln-West.   Majewski found his younger brother, Hunter Majewski, for his last touchdown of the evening on a 12-yard pass.  Seth did this all in the first half.   Seth also earned a Game Ball from Cleveland.com and the Plain Dealer and was voted Outstanding Performer for Week 3 in our area, earning 32% of the vote! Congratulations Seth! 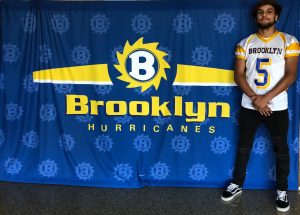