According to Head Coach Alison Rafter, “Kelsey Bruzek’s work ethic and attitude is one of best I have seen in my 15 years of coaching high school soccer.”  This sophomore soccer player is always looking to not only improve her level of play but to also help her teammates improve their level of performance.  Kelsey comes early to practice and will stay late to work on her shot.  Kelsey is an unselfish player as she has been identified by the coaches as “the play maker of the team.”  She would rather give a great pass to her teammate to set them up for a goal than take a shot that she may not make.  Kelsey has two goals and two assists so far this year.  Kelsey has shown she had strong leadership skills on and off the field.  As a sophomore, she was selected as one of the team captains this season. 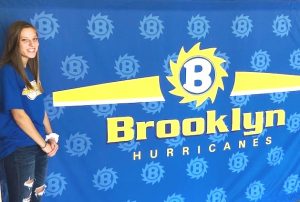